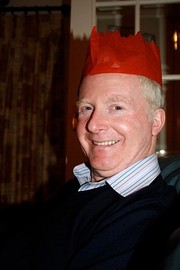 John was born on Saturday March 14, 1959 in Greenock, Renfrewshire, Scotland.

John was the eldest out of all his siblings; Anne Clark, Margaret Ward & Matthew Maher.

John studied at St Columba's High School, Gourock and left in 1976 when John went on to university and accomplished an Electronic Engineering Degree at Paisley University, Scotland.

During his time at University, John met his beloved wife Therese in May 1979. It must have been love at first site as they became engaged with-in 6 months and married in October 1980.

After John was awarded his degree, his first job was working for Rank Xerox as a Design Engineer in 1980.

John had his first baby in February 1982; Collette Marie Maher who is currently working and living in Canada.

John had his second baby in May 1983; Joseph Matthew Maher who is currently working and living in London.

John set-up his first company: BaseMode Ltd in 1983 and went on to contract with British Airspace as a Senior Design Engineer.

John then moved on to Dainippon Screen as the Lead Design Engineer in April 1985 where he worked for the duration of 1 year.

John had his third and final baby in April 1986; Michael John Maher who is currently working and living in Canada.

John next started with Texas Instruments in 1986 as a Production Engineer; then Quality Manager; then Project Manager. He worked here for 4 years.

John started HP Consulting & Integration in October 1990 where he was a Project and Programme Manager, then a Senior Programme Manager. This is what most of us remember him for as he worked with HP for 18 years.

After taking a well-deserved break, John worked at BSkyB as a Development and Recovery Project Manager in November 2008.

John’s final venture was consulting for Thompson Reuters through Xceed, starting in December 2010.

As you can see, John had a very busy and fulfilling life and has left a great legacy.

We want to take a moment now to share with you some of John’s best attributes:

We are pleased to announce the family free is now online

We have added more photos to the follow pages:

Please visit our thank you page.

We have added a copy of the Order of Service to the church service page. Please take this opportunity to download a copy of the PDF if you were unable to get a copy at the Church on Thursday.

We have added more great pictures to the photo section of the website. Remember if you find some you want to share, please e-mail them to rip@johnjmaher.com